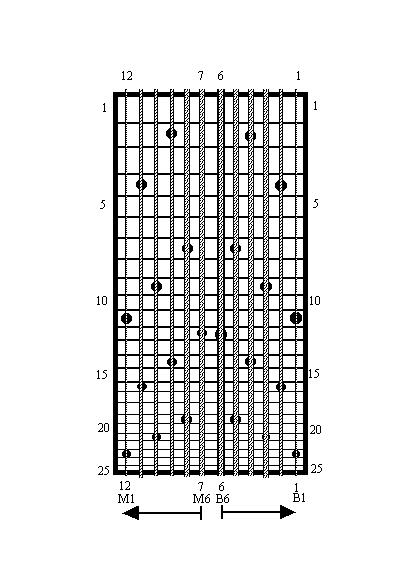 Around 1990, Wolfgang Daiss, came on with what might be the best guitar-reader approach. A mirrored version of the Daiss tuning, represented on Figure 1-4, looks like «1< 6_bass_4ths_LH // 6_mel_4ths_RH > 12 »  seen from the player. Daiss has always been a professional guitar and lute player. He has to work in ensemble, under the direction of a chef, where a heavy demand is made on the reading ability. He has to change frequently from instrument and has to keep some constants whatever the instrument he plays. Therefore he thought : « I shall keep my left hand as if it was playing the guitar, and add a symmetrical right hand to it, and there you have the Daiss tuning. With this tuning, Wolfgang has recently created the « tiptar » part in my opera « Hygiène de l’Assassin ». I would personally recommend this tuning to all the new players starting from scratch. It has three advantages : the bass strings are in the middle, the tuning is in the fourths-fourths family, the hands are uncrossed.

Daiss has some ‘guitarist’ thoughts about this tuning:
6. This tuning is ‘mirrored’ like the Schell tuning. However the axe of symmetry is different. In some cases, the hands playing octave apart parallel melodies are two frets apart, a disposition he likes.
7. String #5 is analogue, one octave lower, to string #6 of the classical guitar (Remember: Daiss plays both instruments currently)
8. String #3 is identical to  #7; #2 to #8; #1 to #9, which allows some identical patterns on both sides. One of these patterns is the following: On row 2, bass side, Wolfgang sees E (on string #3), A (on #2), D (on #1). That disposition of notes is identical to the open guitar.  The same pattern is mirrored, on the melody side on strings #7, #8 and #9.
9.
Today Wolfgang Daiss plays a 14 str tiptar. The tuning is given in Table 1-8