Emmett Chapman has created a tap-guitar (manufactured by Stick Enterprises USA as « Stick » TM) tuned with the bass in fifths, and the melody in fourths, played with the hands crossed, known as the Chapman Standard tuning. In our « word » it would look like « 1<5_mel_4ths_RH // 5_bass_5ths_LH > 10 »  seen from the player
“Emmett Chapman first used this tuning on guitar in 1967 (with lowest three strings flipped to backward 5ths), and in 1969 on his guitar using his unique tapping method.  The “so called Standard tuning” you refer to is the “standard Stick® tuning”, for which Emmett should rightly be credited.”  ! (A letter from Mrs Yuta Chapman to the Author) And so Mr Chapman came up with an instrument made specially for the tapping technique, with a board divided in two, one for each hand, a melody side tuned entirely in fourths (not one hidden third somewhere like in the Spanish guitar). However, the tuning contained two apparently weird features: A bass in fifths, and a crossed-hands technique.

The 5th-4th instrument has the following tuning: bass in fifths, melody in fourths. The tuning word is « 1<5_Mel_4ths_RH // 5_Mel_5ths_LH>10 » seen from the player. In this system, the bass strings (6 to 10) are tuned in fifths towards the player. The lowest string acts therefore as an axis of symmetry (see FIGURE 2-2).
This tuning is not the easiest to play bass lines but it is a favourite for those who like to play open chords accompaniment with the left hand.

Notice also that this tuning is not mirrored. This can be a slight disadvantage: as seen by the player, all the strings are separated by a virtual fourth, except between middle strings (6 and 5). This space is therefore not entirely coherent. It can be seen that the lines of the C-dots are broken. This is a problem mainly in the readability of the board. Emmett Chapman is conscious of this, but he prefers his tuning, as it allows him special chord positions in the left hand on both bass and melody parts of the board. A number of “barré” positions are idiomatic to his style.

Figure 1-6 The Chapman tuning for a 10 strings instrument seen from the audience   The pattern of notes is represented at row 5. Melody is in fourths ascending to the right, bass is in fifths ascending to the left. Playing is done with crossed-hands. 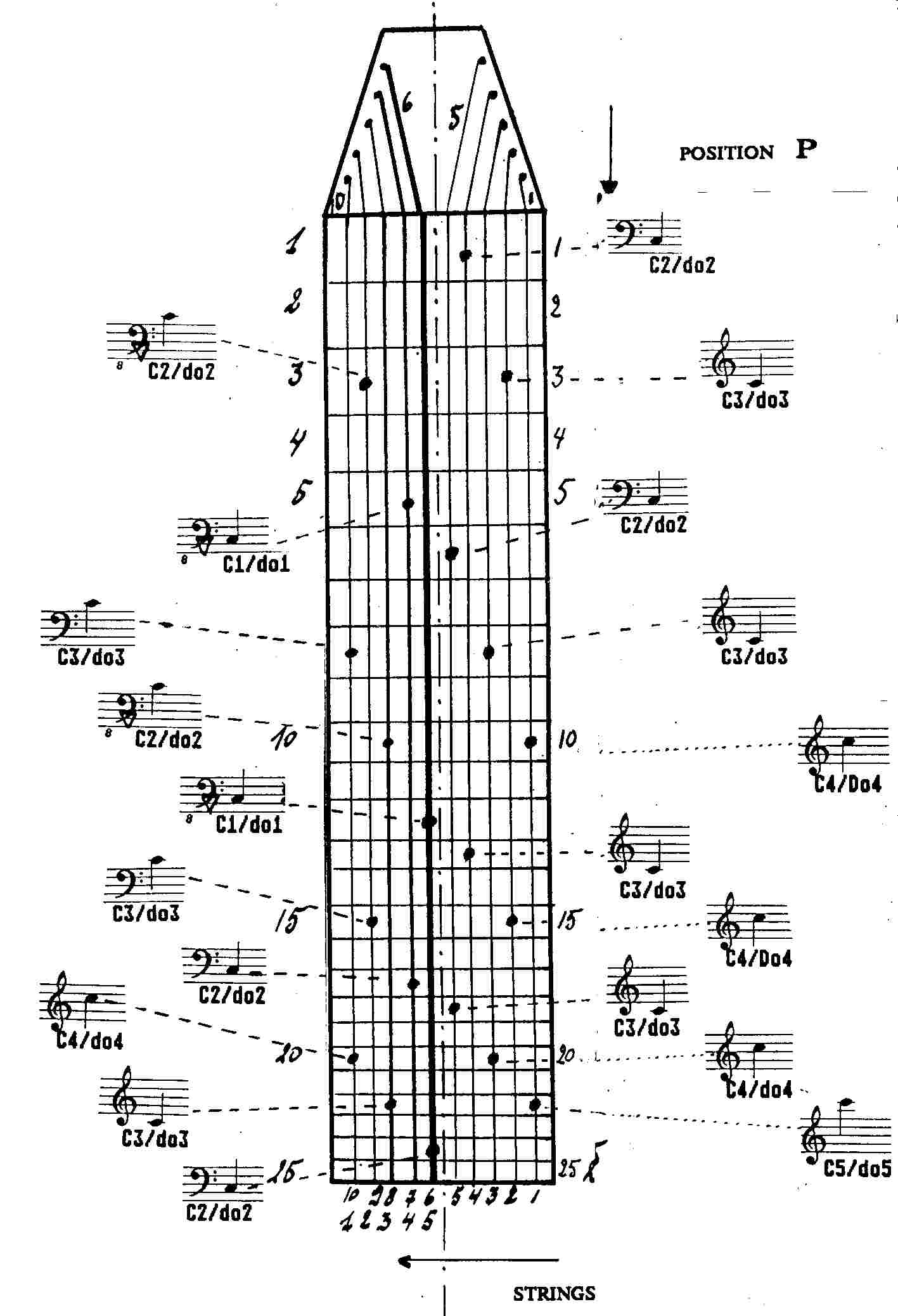 Around 1990, Mr Chapman  started to manufacture instruments with 12 strings instead of 10. The tendency today goes in favour of these 12-strings instruments  which are easier to play.
The strings can be divided into two groups of  5 bass-7 melody , or simply 6-6. The additional strings are very welcome and will involve usually one or more lower strings on the melody side and a higher string on the bass side. The additional strings greatly facilitate the playing of difficult pieces. The bigger overlap between bass and melody register also offer new possibilities.
The table below shows the tuning of the 6/6 disposition of strings. The gauges are given for two alternatives: medium or a heavy. The source for the normal set comes from the author. The source for the heavy set comes from Frank Jolliffe’s Power Tapper specially designed for the Warr Guitar.

1.3.2.2.3  Baritone, and transposed variants of the Chapman tuning

Emmett Chapman has brought up many  tuning variants belonging to the fifths-fourths family. These are mainly with  lower pitches and thicker strings. The playing method is not changed, although the sound is different. To quote Chapman: “They are fuller and thicker sounding, giving the instrument rhythmic punch and strength”. (Stick Wire, Aug. 91). The table list the pitches of the open strings. The numbers next to the pitches indicate the octaves.

On the Baritone tuning , the melody strings are a fourth lower than on the Standard and the bass strings are up a whole tone.