Let us represent the sign C-F-G-c in this system. This time we observe a similarity with the sign C-F-G-c of the melody side: both signs look the same. But this similarity is an octave apart, unfortunately, because the player sees c-F-G-C and not C-F-G-c.
An amusing phenomenon happened: The player sees fourths but hears fifths. When playing fifths towards him, he sees inverted fifths, that means fourths. But these are virtual fourths, and here is their effect: on the left c-F-G-C (fifths), the notes have kept their name, except for their octave! This has the following consequence: playing an identical pattern on both hands will produce identical notes but with an octave jump at each string change. This is of high visual facility, but musically useless.
There is an historical origin to the tuning in fifths: When Emmett Chapman was experimenting with ordinary guitars, he  once had  the idea of turning his guitar head down (this is genius!). What he saw then is analogous – but not identical – to the actual string set-up. Further reasons for adopting this tuning are really reflecting Chapman’s personality as a musician: he is an improviser and needs therefore the roots and fifths of his chords more than diatonic bass lines; he is a creator of “objets musicaux” – “musical objects”, to quote Pierre Schaeffer – probably willing to pay more debts to Jimi Hendrix than to the written musical tradition.
In short, for an identical pattern, the playing of both hands is different, which is difficult. However there is a little trick (see Figure 1-9) which facilitates the visualisation of the board. 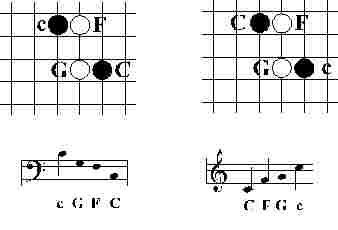 Figure 1-5 The relationship between left and right hand on the 5-4 instrument : The melody space of fourths is represented on the right side, while the bass space of fifths is on the left. It looks like the sign is transposed from the right to the left and remains identical! Not exactly: the name of the notes do not change, but their octaves do. An inversion has occurred. The player sees fourths but hears fifths.